When I reflect on all of the jobs I've held (and there have been many), my favorites include those writing and those waiting tables. The waiter jobs top the list mostly because of how my shift ended. After the last customer, the restaurant or bar shut down, and I left without a care about the place or its clientele. Basically, I was able to leave the job at the door because relatively few issues existed that carried over from shift to shift. Each day was new, which meant every night was practically stress-free.

Not everyone has that luxury at their job, but most people can end their day and not think about work stressors until the next day. That’s not easy for corrections professionals, where each day they face situations that push their stress tolerance to the limit. After shift, it can be difficult to shrug off the day’s events because of a CO’s eternal duty as public safety officer. This, in turn, can cause a string of endless hours consumed by work and the people they must deal with.

Not surprisingly, this can severely impact one’s home life. Sergeant Barry Evert knows how this feels, as his job involves watching some of the most violent offenders in the country. This week, he offers his experience on managing work stress and urges COs and other practitioners to separate their lives on the inside so they can enjoy, or perhaps save, their lives on the outside.
Jim

Check it at the gate, avoid the burnout

Separating life inside for a healthy life outside 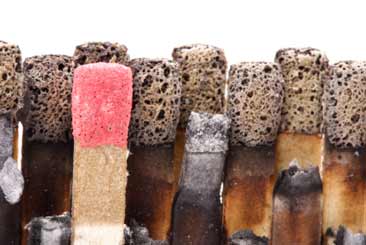 A lot of time and effort is spent on ensuring our physical and tactical readiness should we have a major incident in our institution, or even in our community. Countless hours and dollars are spent by research companies working for law enforcement to determine the best and safest tactical practices for almost every conceivable situation; but very little time is spent on our mental well-being.

With a rate of suicide almost ten times more than the general public, we are a sick society. Our divorce rates are staggering, and many of us barely live long enough to enjoy our retirement. Most of us have come to accept these grim statistics as “part of the job.” It is high time we change our attitude about this problem, and spend a little time working on our psychological well-being.

Have a story idea or article? Send them to editor@corrections.com.

This is a growing problem in corrections everywhere there are competitive agencies. In Orlando at Orange County Corrections we also have a big turn over. There are a lot of surrounding counties that are close as well as the sheriff and police departments that also take an abundance of officers.

I've been in corrections for 14 years, but because Florida doesn’t pay very well, I left with ten years on the job to go to a county that paid me $10,000 more a year.

The hiring process is also extremely long; it took me about six months to get hired. If you’re non-certified, it takes even longer because you have to go through the academy and pass a state board test. I believe pay and job safety are the two biggest issues causing turnover, as well as over-worked staff because of staff shortages. I love my job and intend to stay at this organization until retirement. Thanks for the article. I see shortage is nation wide.
GS, BRC Intake, Florida

After reading articles and looking at the advertisements in your ezine, it is abundantly clear to me thatmost jails and prison systems in the U.S. are improperly managed and understaffed. The employees are under paid, under appreciated and often put down by supervisory staff. With low employee morale, how would one expect anyone to assist the needs of an inmate when one’s own needs are not being met?

Employee morale is an issue that needs to be addressed by prison systems officials in this country. To retain adequate staff of reasonable intelligence, corrections needs to treat its security employees as advisors and listen to what they have to say.

After all, they are the ones on the frontline, and they are the ones that know and understand every aspect of an inmate’s life behind bars. An officer is on the inside, the inmates live looking out, but the administrator is on the outside looking in. The point is, listen to security personnel and morale will improve.
JF, CO, Wallkill, New York

Letters to the editor can be sent to editor@corrections.com.
Please reference the article when sending a comment.

Thoughts from the command center: Strategizing for control, Part II

Editor’s note: In part one, Joseph Marchese discussed the first two tactics, confine and contain, Strategizing for control as a part of a “four C” strategy to manage and avoid potential life-threatening situations. He concludes by detailing the other two Cs, consolidate and control, and discussing initial response training protocols.

Consolidating staff and resources under one command is perhaps the most challenging aspects of emergency response. As the magnitude of an incident grows, more responders come to the scene. The more responders without proper supervision increases the chances for missteps. More

Just when you thought tuberculosis (TB) has had enough coverage in media outlets and medical journals, the emergence of highly drug resistant strains of Mycobacterium tuberculosis in South Africa and the former Soviet Union, has brought the disease back into the limelight. Extensively drug resistant TB, also known as XDR TB is resistant to the more popular therapies used to battle TB, including isoniazid, rifampin, fluoroquinolone and at least one of three injectable second-line drugs (i.e., amikacin, kanamycin, or capreomycin). More

Since the increase in crime during the mid-1960s, the primary challenge within the criminal justice system has been the substance-abusing offender. Society in general, and the justice system in particular, has revised their thoughts on crime and what we should do about criminals. However, the concern regarding the drug addicted offender remains constant. More

The American Jail Association (AJA) is a national, nonprofit organization dedicated to supporting those who work in and operate our nation’s jails. AJA’s goal is to provide the best and most current information available through our American Jails magazine, extensive training seminars and publications containing information the jail professionals rely on. Learn more.

Date: 6/19/07
In this course you will learn proven strategies and tactics to: -Attack stress at its source. -Know the 7 major causes of stress and how to neutralize them. More

Date: 6/20/07
Adult Anger Management will be examined. A demonstration of the Conover Assessment will be conducted with a discussion of its usefulness. More

Date: 7/8 - 7/11/07
Participate in over 70 educational sessions for all levels in the community corrections profession. Network with your peers at special events. View the latest products in the resource expo. Build your career--earn contact hour credit. More

Date: 7/8 - 7/11/07
The CEA Executive Board and 2007 Conference Chairs invite you to attend the 62nd CEA Conference in Atlanta, GA; the big city full of Southern hospitality. Workshop Proposals may be submitted electronically on CEA's web site, ceanational.org. More

Life can only be understood backwards; but it must be lived forwards.
- Soren Kierkegaard